Tonight our family took communion and told the story of Passover….how it began with Moses and ended with Christ as the final Passover Lamb. Last year we put on a play I had written. I’ll share some pictures from it and then I leave you with clips from the gospel of John. I have put “Laugh Yourself Silly Thursday” on hold in observance of Holy week.

Oh we also did our first foot washing 🙂 Michael was all giggles.

props for Passover play. The backdrop had Egypt on the front and on the back it had the cross.

Michael LOVED being Moses….mainly because he got to play with a big stick. 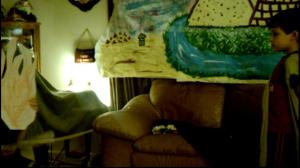 My mom played all the Egyptians including Pharaoh….so she had to endure all the plagues (things being thrown at her…having bumps painted on her arms etc…) Here we are putting blood on the door post…we had to improvise. I played all the Hebrews as well….sigh…..this play would be great for a big family.

Then we had the last supper and Jesus Crucifixion. We talked about the Resurrection after the play. Mom also played the Roman soldier….poor mom.

Where was my hubby the whole time? He narrated :). He’s not into acting. We didn’t have an audience but ourselves….it was fun though and Michael was so excited. In 2009 we  just went through the plagues during our Seder….I painted red dots on Michael. You should’ve seen his face lol. He was 3 at the time and he was getting freaked out by all the plagues. I took a male doll and used it to symbolize Jesus….painted red dots on it’s feet and wrists.

We didn’t do a Seder this year. I found out some of the traditions were Talmudic & came after Christ, so we just skipped it. But we did get some matzoh and grape juice to do the Lord’s supper. We talked about Passover tying into Jesus’ death. 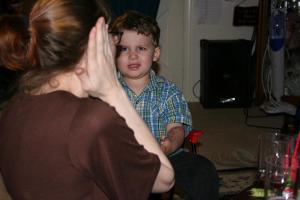 May God bless you and remember The High King Lives! ~Amber Dover

Jesus is the Vine

The Garden of Gethsemane