Hello friends 🙂 This is a late Sunday lol but here I am. This month is coming to an end. We’ve finished up Advent except opening presents etc. Enjoy the pics! Sorry, to be so short……lack of sleep here …zzzzzzzzzzzzzzzzzzzzzzzzzzz…

I forgot to show you how our salt dough ornaments turned out this year. You can tell who did what.

Here is the special tree I talked about in this post: https://amberdover.wordpress.com/2012/12/05/thanksgiving-blessings-advent-prep/

I had it’s pic framed for my in-laws Christmas present.

We used that Sponge Bob ice cream set we got at the White Elephant party. I gotta say…it makes me smile. 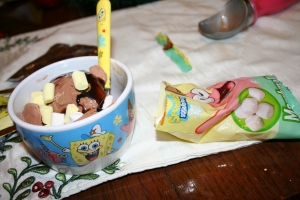 We danced to carols at our advent party & played pin the star on the tree, wrapping paper limbo, & Christmas cookie matching game. Here’s Michael warming his hands by the “fire” ;). Not many pics because we were all in our PJs. We read the Christmas story & I’ll mention some facts in a bit. We also watched “The Nativity” with my parents earlier in the week.

We went to the Antiquity center again. This time it was 30 something degrees & dark. Our guide gave us the tour and showed us how homes would’ve looked in Bethlehem. We learned that the word for “inn” in the Greek just mean’t guest chamber. They would not have had big inns. We saw on the tour how small the houses were. There were no wooden stables & house. Wood was scarce. Most things were built with stone.

There were some nice sheep. We brought home some of their presents on our shoes…

This is what a manger would’ve looked like. The sticks on the stone fence kept predators from jumping out with a sheep.

The sheep trying to eat the tree?

Michael was super excited to meet a shepherd. You’d think he’d met a movie star. He was SO shy. It was cute :). We stood by the fire & talked to him. It was freezing.

We had a little break and enjoyed hot chocolate. We brought hot tomato soup & grilled cheese sandwiches from home. Yumm! 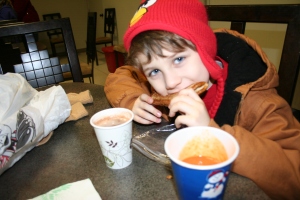 There was a picture presentation with a few actors. We sat in a Roman Amphitheater replica. We froze. Here are the shepherds with the sheep. Fact: The shepherds were at Christ’ birth.

The Wise men. Fact: they were NOT at Christ’ birth and we don’t know how many Wisemen came. We assume three because there were three gifts.  The Magi came after Jesus was circumcised and presented in the temple.  We don’t know how old Jesus was when the Magi came but most likely several months old up to two years old (because of Herod’s decree). But the Magi find Jesus in a house in Bethlehem. Then Joseph is warned to flee to Egypt because Herod issues his decree to kill all baby boys 2 and under. Most likely the gifts of the Magi helped Jesus’ family financially make the journey. 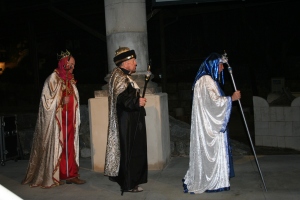 Fact: we don’t know if Mary rode a donkey. She probably did because A. horses were expensive and B. she was pregnant…walking would’ve been hard. I guess the Nativity set up was made to make the story easier to tell children. It’s sad though that two people are left out. In between the Shepherds visit and the Magi, the family goes to the temple where they meet Simeon and Anna. Simeon was waiting to see Messiah before he died. Anna was a widow who lived in the temple & waited for Messiah too. 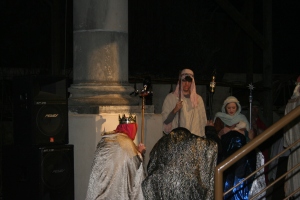 Another Christmas tradition of ours is to read or watch The Christmas Box.

My Dad was given “The Christmas Box” book when it came out. He read it to me every night for several nights. He also made “Christmas” boxes for my Aunt and Grandma (Mema). I have Mema’s box now and I made it into a memorial for Dad. I have his pictures etc inside it. Last year, I read the book to my family each night. It made me cry at the end. The story is about a busy father and how an elderly woman & a miraculous Christmas box help teach him to treasure his daughter.