In this post: Our trip to Enota Mountain Campground to celebrate Sukkot (the Feast of Tabernacles) and our stay in Dahlonega, Ga to see the gold mines.

PS: At the end of this post I have links with our past Sukkot celebrations and what Sukkot is all about. 🙂

Hello dear ones! Last weekend the family and I traveled to Enota Mountain Campground near Hiawassee, Ga for some Sukkot camping. We had originally planned to camp at Desoto Falls, a favorite spot of ours. Then we saw that it was going to rain Saturday and didn’t want to go there for just one night. Anywho, long story short, through a series of events I found Enota and we decided to stay one night in Enota and then spend the next at a hotel in Dahlonega. I had thought about Helen but since we’ve explored it before, I thought it’d be nice to check out the Dahlonega gold mines.

So it took us most of the day to drive to Enota. We got there that afternoon with just enough time to set up and for Michael to fish before it got dark.  It was a nice drive into the mountains.

The staff were super friendly. 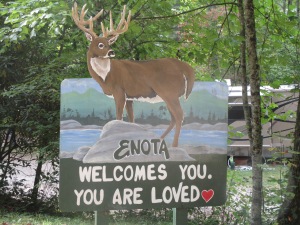 I like how the lodge has a fence made out of antlers. Enota used to be a camp for boys.  It was a bit run down compared to how it looked on their website. Times are hard in the states. This is a non profit place and money is probably short. Still we enjoyed our stay.

We decided to camp near the stream. It was peaceful and quiet. We did get neighbors on the other side of the stream later that night. Thankfully they were quiet. 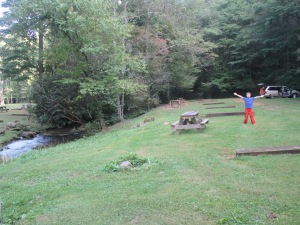 Michael was glad to be “free” of the van lol. Here’s the other view. Follow that road and it takes you to the lodge, farm, and playground. 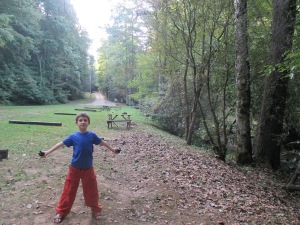 Michael and I helped Chris set up the tent while he made a fire. Here’s Chris and Michael.

We decided to roast some hot dogs before letting Michael catch a fish. I was comfy :).

Enota has a trout pond that you can fish in as long as you keep what you catch and pay $6 a pound or per fish. You don’t even need a fishing licence to fish there. They had poles too.  Here are the ducks that live at the pond. They have these crazy mohawks! The white one pecked my toe while I was filming. I don’t know what his problem was. We fed them too! 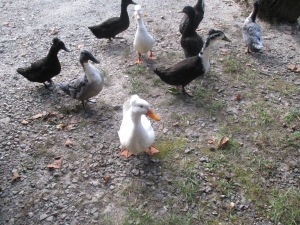 Chris helped Michael catch a fish. We didn’t want to pay for or clean more than one.

There was a small “waterfall” if you can call it that, near our camp.

Here’s Chris cleaning the fish in the stream. I’m so glad I married an outdoorsy man. I’ve never did well at cleaning fish.

Michael throwing stones. He was disgusted when Chris showed him the fish’ insides lol.

Chris cooking the fish on a stick while Michael draws. Later we wrapped the fish in tinfoil and seasoned it to make it cook faster.

Michael and I had collected leaves earlier that day. That night we strung them up.

We hung them on our tent for Sukkot decoration. We talked about why we celebrate Tabernacles (Sukkot) and how this world is not our true home. Our bodies are like tents but one day we will go home to Heaven. We are pilgrims on this earth. We talked about the Israelites living in tents in the desert until they made it to the promised land. We also talked about how Jesus put on flesh and came to tabernacle with humans. We discussed how it’s very possible and likely that Jesus was born during Sukkot and that the manger was a sukkah.

We roasted marshmallows and… 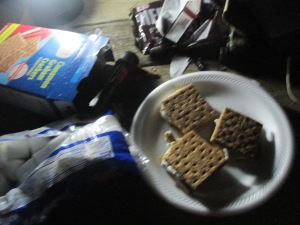 We sang worship songs and campfire songs. I played the guitar this time. This is how dark it really was.

This is how it looks because of the camera’s flash ;).

That night I read Michael a Jewish Sukkot legend for fun. I got this book at the library. Its about an evil magician that makes all the adults forget holidays and at that time Sukkot. So the kids celebrate themselves and they break the spell off their parents.  Now supposedly in a certain village, the kids lead the prayers etc in honor of that time.

We woke up that morning to light rain. It was so light that we were able to pack up without getting soaked.

Since Sukkot is also about the harvest and being thankful, we went to tour the farm at 8 am. The tour guide never showed up. They were busy trying to save the pond that had started draining the day before. Another family showed up as well so we just all walked to the farm ourselves.  I was unable to milk a cow like I had wanted but we still got to see animals.

Maybe one day we will go back and milk a cow…maybe help plant and harvest vegetables. 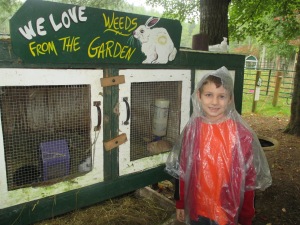 Michael still wants turkey for Thanksgiving :).  He’s not super sensitive in that way.

We got to pet the pony.

We had plenty of time before our hotel was ready in Dahlonega. So we stopped by Helen, Ga on the way. 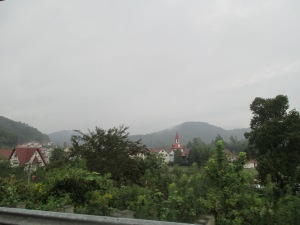 We had breakfast at the Huddlehouse which I believe is the only breakfast joint there. We had to stand and wait for a table. We were wet and cold so the hot breakfast was wonderful. Yes Fall made it to North Ga on time. It was chilly. I’m glad I packed sweaters for Michael and I. We didn’t want to linger long so we just stopped by Hansel and Gretal’s for chocolate and left.

We decided to tour the Consolidated Gold Mines in Dahlonega before going to our hotel. We bought a tour which came with gold panning. We panned for gold first and found about $8 worth of gold. Yep, real gold. 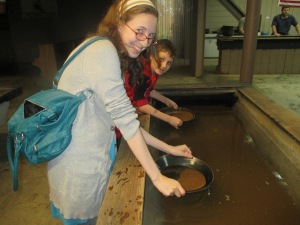 Then Chris and I had to put on hard hats to go into the mines. Michael was too short to need one. We watched a brief video on the history of the mines.

The stairs etc were steep and I was honestly really nervous going down there.

Here’s our tour guide using Michael as an example. Did you know that back in the day little boys were used to pass messages in the mines? It was because they were considered expendable back then. Horrible I know! Miners also didn’t live long . It was a terrible job. They often had hearing loss because of the booms. The chemicals that were used caused black pneumonia I believe, that would slowly kill a person. The miners had to stay down in the mine while they were blowing things up. The pay wasn’t that great and if you got injured you were out of luck and no longer important. There were no labor unions.  Anywho, our guide in a witty way made it clear that we would not have wanted this job. 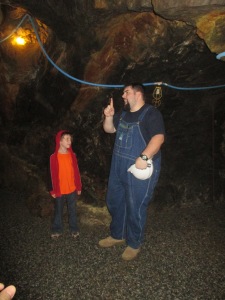 The gold on top of the Georgia capitol building came from this mine.

It was a bit chilly and very damp. Sadly, we didn’t see any bats. The guide says they are usually everywhere.

Here’s a rock formation that took about twenty years. 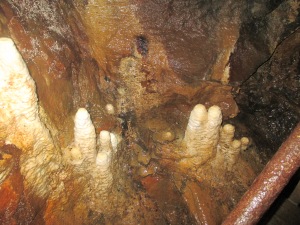 The one place where you can see the light!

We got a souvenir magnet and a hard hat for Michael. He played miner at the hotel the rest of the day. 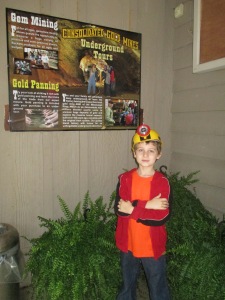 We really enjoyed relaxing in a hotel room after “roughing” it the day before. I think it should be a new Sukkot tradition, camp a day…relax a day.  I brought along a couple of Scarecrow books to read. We also watched shows about kittens lol. We don’t have cable so we enjoyed that.

This Sukkot was different but very enjoyable. We’ve usually pitched our tents in our backyard or somewhere nearby. You can see other Sukkot celebrations here: https://amberdover.wordpress.com/2012/10/07/my-family-rocks-sunday-sukkot-the-feast-of-tabernacles/