Hello dear ones! I’ve got a unique and original party for you. This is a Narnian marathon party based on ALL of the books. I was inspired by many things but most of the crafts are all my own. I can’t wait to share with you! Here we go!

So I searched far and wide on Pinterest for Narnia party ideas. All I found was winter parties for The Lion, the Witch, and the Wardrobe. I wanted a party that had elements of all the books. My son Michael (who is about to be a big 8 yr old!) read all of the Narnia books during March. I promised him a Narnia movie marathon party for his hard work. So I had a month to work on this while Michael plugged away. He read 4 to 5 chapters a day to meet his goal.

Anywho, so I decided to make props that would represent the different books. I did major on the books that have been made into movies, but I also threw in little pieces and/or quotes to represent the lesser known books. You can tell that I mainly had a blast with my two favorites: The Lion, the Witch, and the Wardrobe & The Voyage of the Dawn Treader. I’ve got some neat props for The Silver Chair & The Magician’s Nephew too. My favorite pieces are the wardrobe, Lucy’s mirror with Aslan in it, and the painting from the Dawn Treader.  Here, take a look at the pics first, then I’ll get to the details of how I brought it all together.

So…there’s a lot here. The most intricate props I worked on the week of. Some props I literally thought of the night before when I was setting up. None of these are hard and most of this was inexpensive. It looks more complex than it is. The easiest part was printing quotes from all of the books. I’ll put my Pinterest link at the end of this post.

*I had a hard time finding Turkish Delight. T.J. Max was the only place I could find any and it was up front near the register. I’m so glad I found it because the last time I attempted Turkish Delight it was nasty. I’m not that fond of it anyways. I found mini lion figurines at Party City and I put them on the cupcakes. It was a box cake but the meatballs were homemade…and SOOOOO good. I stuck plastic swords in them. I got the plastic cups from Dollar Tree.

Movies: The Lion, the Witch, & the Wardrobe, Prince Caspian, and The Voyage of the Dawn Treader.

*We only got through two of the movies that Friday because we had school. We carried our marathon into Saturday morning.

*The sheet music will be on my Pinterest. I’ll also include my royal hairstyle. It was last minute but it fit. Michael loved Mr. Tumnus’ umbrella & going in and out of the wardrobe.

The Lion, the Witch, and the Wardrobe

The Voyage of the Dawn Treader

The Horse and His Boy

Here are some pictures of the prep stage. Planning took the longest. Set up was an all nighter. It was worth it though. Michael was amazed. I kind of was too. I like to use my imagination and anything good that makes me feel younger is a plus.  With a little imagination you can pull off an inexpensive Narnia party too. It’s amazing what can be done with cardboard. And plastic table cloths can cover eyesores, act as back drops, and can even become snow or ocean. 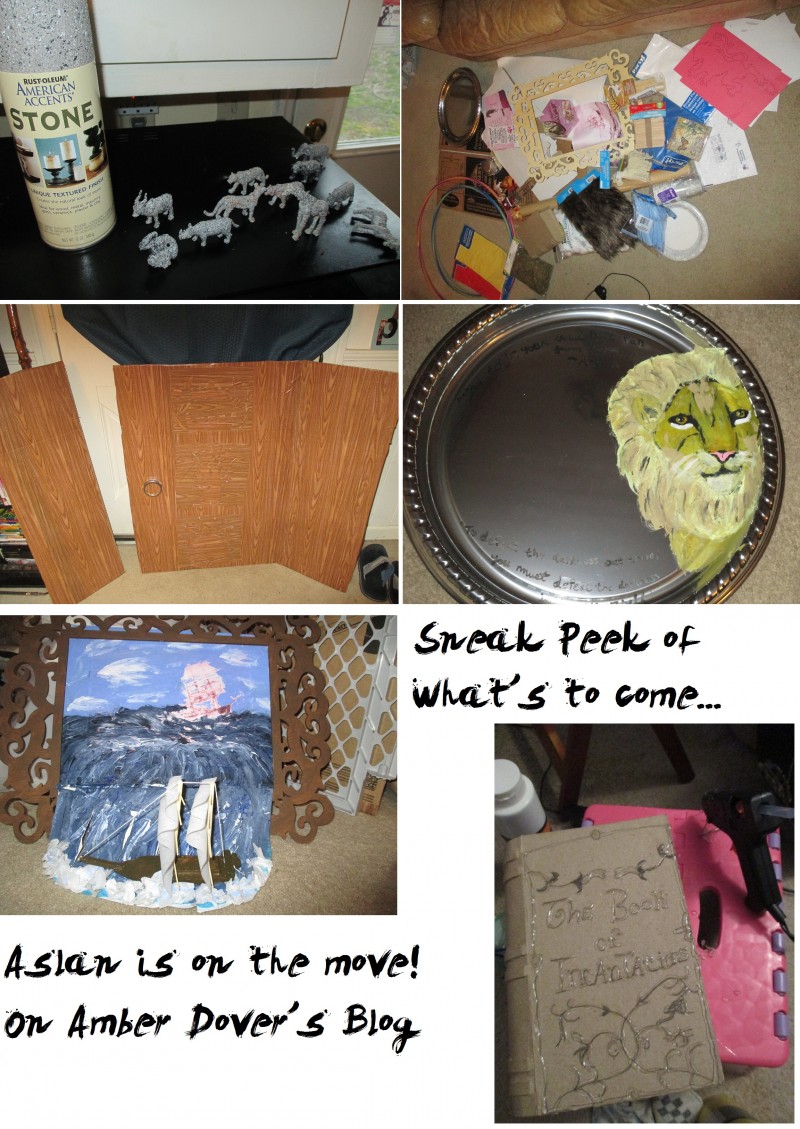 After the party, I found more Narnia ideas…like golden play dough for Eustace as a dragon. Hmmm….maybe a Hobbit idea too. Hey!

I hope you enjoyed visiting Narnia with me :). I pray I will encourage and inspire you to step out the box and throw your own unique parties. Feel free to use these ideas, I just ask that you link back to me. God bless & remember the High King lives! ~Amber Dover

PS: Go to my Parties category to see all the other neat parties we’ve done, including date nights. We’ve got Harry Potter (mostly original), Time Machine parties for our study of the 20th century, the Hunger Games, Star Wars, and tons more. Please check it out 😉 and leave me some comment love.