In this Post: A mishmash of Hobbit parties with my own flare. Also an original  homemade board game. Come with us from the Shire to Mirkwood all the way to the Misty Mountains!

Hello dear ones! I am so excited to share our Hobbit marathon party with you! As you may know, the second Hobbit movie, The Desolation of Smaug, just came out on dvd. We are big LOTR and Hobbit fans here. I took two parties and mashed them together. Then I threw in crafts and snacks that I found here and there. Add a homemade and original Hobbit board game and you’ve got Amber’s flare ;).

I do want to thank the two main bloggers that inspired me. The other ideas are on my Pinterest, which is listed after the picture.

Though I did not use them as intended, I did use several of the printables from The Dating Divas. I love how they inspire me continually.

The Given Life has the coolest Hobbit party I’ve seen. I did my own version of two of their activities.

I hope you’ve found this post to be inspirational for your own Hobbit party. Links at the bottom!

Pinterest link: (email sub. come to my blog to see it)

You can find all my parties here:

In this post: The family transforms Michael’s playhouse into Terabithia. Costume fun at Fall festivals. Also a pumpkin carving and owls that share God’s love :). Meet Glinda/Evanora, Bilbo the Hobbit, and Jace from Duck Dynasty! 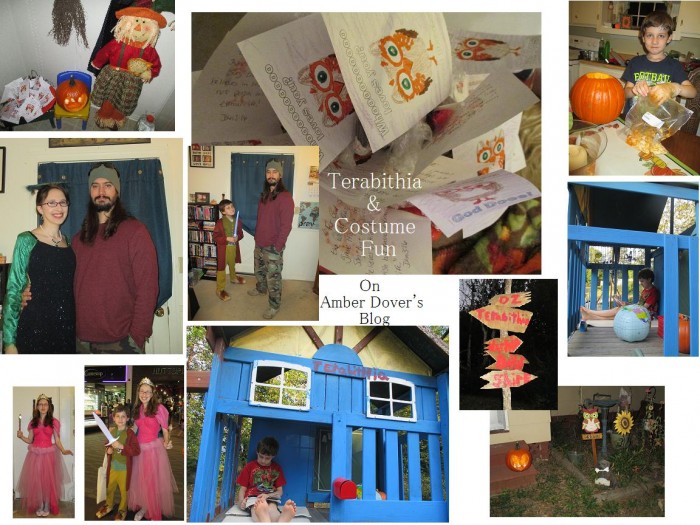 Hello dear ones! We’ve had an eventful October. We don’t do scary stuff on Halloween. We like to go to Fall festivals throughout the month. So costume fun isn’t just one day for us. I’m really against anything gory or ghoulish. I love Autumn and I love dressing up though (candy’s not that bad either). I also think Halloween itself is a great opportunity to reach out to kids.

Michael helped me color these owl papers and I put John 3:16 on the back. Then I taped it to a bag of candy. 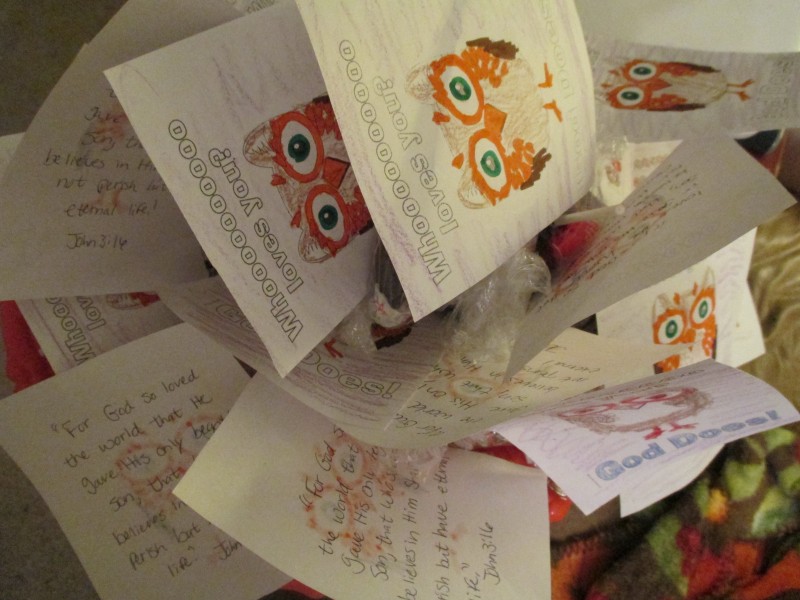 I grew up being well aware of the roots of Halloween etc… But I believe what the enemy means for bad can be put to use for the good (in some cases…). For example, the mall had trick or treat and a church gave out candy bags to hundreds of kids. We got home and found a gospel tract in the bag. So hundreds of kids were given the gospel of Jesus….because of Halloween.  This is also why we keep our light on and leave a bowl of candy. One year we gave away cds with the gospel message for kids on it (cute musical). I don’t believe Christians should fear the day.

Another Halloween tradition that can be used for good is the Jack-o-lantern. We like to carve pumpkins and we don’t worship the devil ;). The story behind the Jack-o-lantern is grim but I like to put the light to good use. Jesus is the light of the world and what better night to share His light than Halloween when all manner of ghouls are glorified? Chris is pretty handy and he’s carved elaborate designs like “Jesus loves you” and a cross before. This year we went simple and stayed with “God’s love” as a theme. So we had a big heart. I didn’t bother with real candles this year.

Michael used gloves to dig out the pumpkin guts. My lil man doesn’t like to get his hands dirty! 🙂 We saved the guts so we can plant the seeds back in the pumpkin later. Chris carved the pumpkin but I came up with the design. So it was a family matter.

Now, a little break from trick or treat. I’ll get back to the costumes in a bit :).

Michael finished reading “The Bridge to Terabithia” the week before. I wanted to save the details for today since the biggest Terabithia project was a family thing.  Michael read the book and reviewed with me. I had him draw his own fantasy land in his reading journal. It’s called “Funnyland” with “magic and funniness”. He also made a leaf crown which we reused for our Greek studies. We were going to build a small bridge but didn’t.  We also watched the movie. But the best idea came from Michael….

He wanted to transform his playhouse into Terabithia. I’ve been wanting to paint the faded playhouse for ages. Chris took Michael to the hardware store to pick out paint. I found various odds and ends to make a wind chime or “bells”. I hung up string to make a nature loom that Michael could weave leaves and flowers into. Then we all painted. You can see “Terabithia” written on the top. Chris helped me fill an old tire with dirt and Michael’s flowers. Chris also cut pieces of wood so I could have fantasy road signs. We have Narnia, Terabithia, Oz, the Shire, and my own fictional city, Davar.  I went back later and made “Narnia” more legible. I’ve never had nice handwriting.

Michael likes to read and do schoolwork inside Terabithia. It was a lovely sunny week so what the who! I love the bubbles picture. My baby is adorable :). 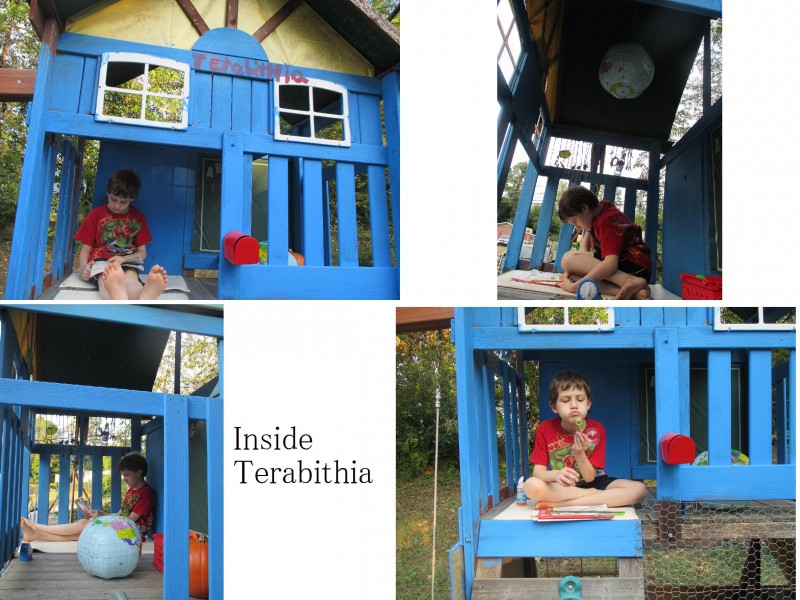 Now, for costume fun. Are you ready to meet some celebrities? Okay, so it’s really us but I think our costumes were great for the price. Jace was super easy. Chris was just himself!  He usually keeps his hair back in a pony tail though. If you’ve kept up with this blog then you know we love Duck Dynasty. They remind us of family :).  Michael’s Hobbit costume did cost a pretty penny and we had to order it online but his was the only one.

I decided to be two people. This time I was Evanora the wicked witch of the East from the movie “Oz the Great and Powerful”. I don’t like evil but I really liked Evanora’s style. No one knew who I was but this outfit was the prettiest of the two.  I got the black dress from Goodwill way back when. I added green sleeves. I bought the necklace online. It’s not the official necklace but it’s so much prettier. I got the earrings at Target. I will be re-wearing the jewelry often for sure.  I ordered Evanora’s head band online.  I had difficulty achieving her hairstyle so I did a simple bun and pulled my part loose a bit. I went with green eye shadow and lots of silver glitter.

We all went to a church Fall festival and visited my Mom afterwards. 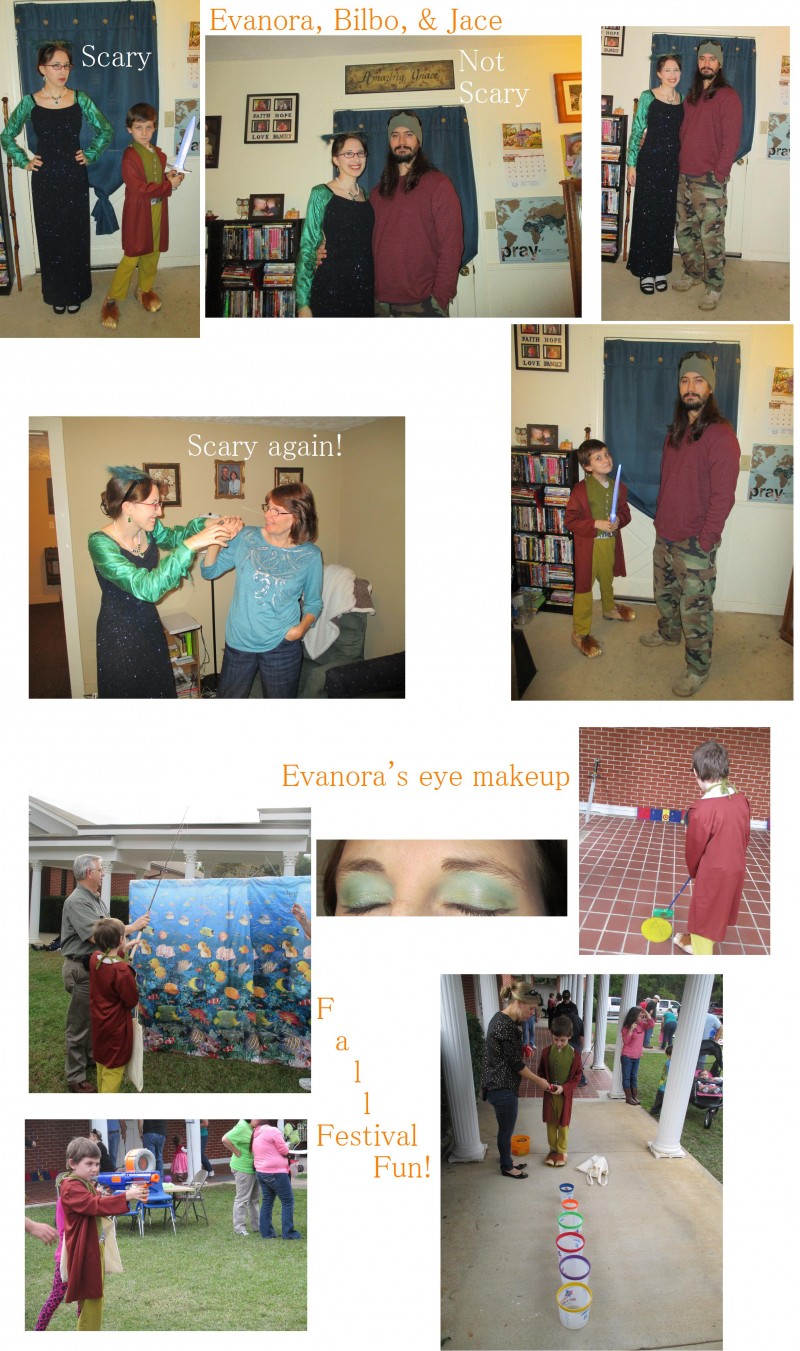 Then on Halloween day I was Glinda the good witch of Oz. I mixed old Glinda with the new. So I have the modern Glinda’s crown and wand. My dress is pink for the old Glinda.  I wore light make up with silver and blue eye shadow. I added glitter too. It’s hard to tell with flash. I felt prettier in this outfit than I actually was. I should’ve used the pink fabric for a shawl instead of sewing it to the back of my dress. I had so many wardrobe issues.  I’ve had the pink dress forever. The tutu I made for Mom during our Oz party. I just made it shorter for me. My white tights were black from Evanora’s shoes :(. That little jewel on the crown left a bruise.

Michael and I “trick or treated” at the library and mall. No one knew who I was this time either but all the little girls lit up and said “Look at the princess!”.  For a night I felt like a character at Disney World. There were adults dressed up but I think I was the only poofy pink adult princess. So the kids wanted to say “hi” to me. I felt like a nicer person in the Glinda costume. Ha! 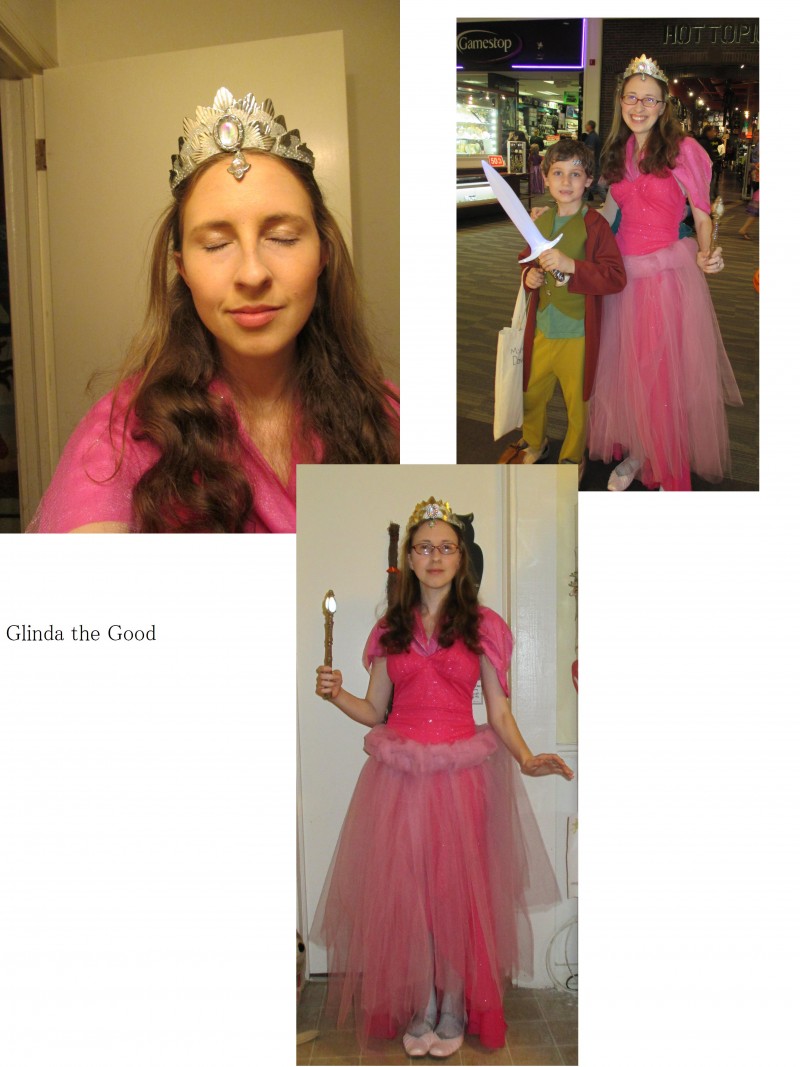 I got so excited that I decided to have a fashion show when I got home. I even pulled out my wedding dress from the closet. It’s been 8 or 9 years since I’ve taken it out. I was happy to see that I still fit. It was a tad tight but that’s it. I really like that dress. I’m planning a costume for it without the train. I know I can never sell my dress and I hate for it to collect dust. It’s such a pure white dress…so delicate…sigh. 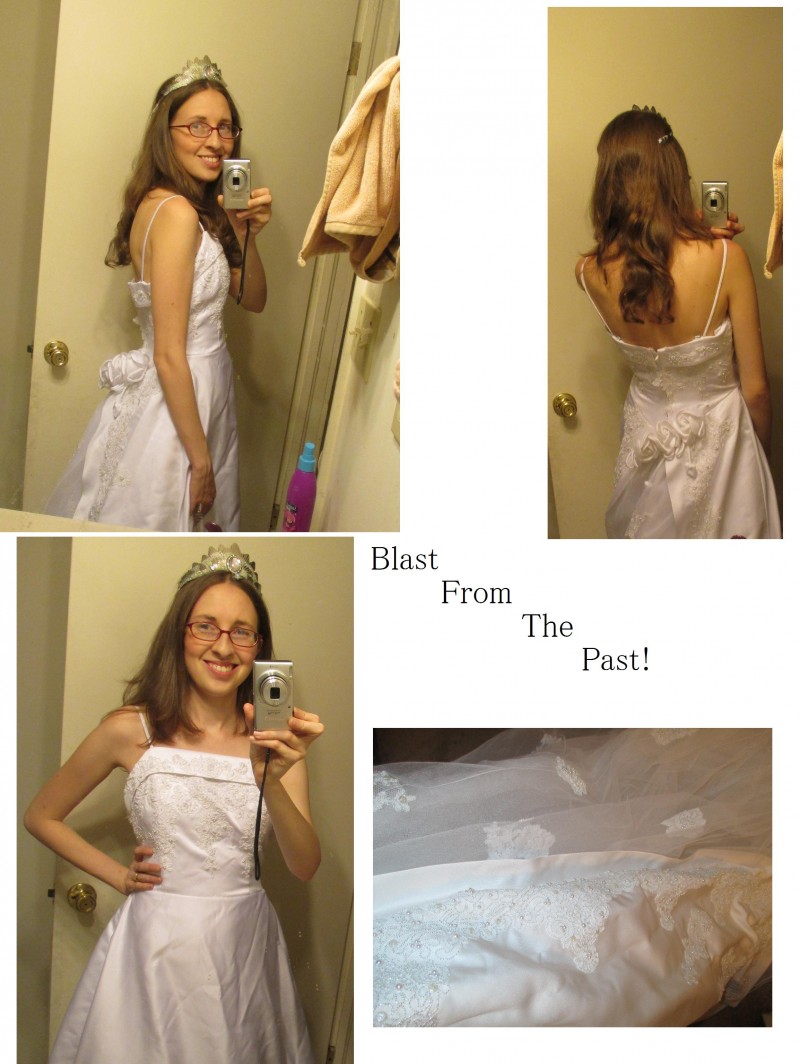 And I leave you with this…

Chris feeding Tessa with chopsticks. Ignore the cat’s bottom. What a week! Did you dress up this year? Please share your costumes/ kid’s costumes in the comments :). God bless & remember the High King lives! ~Amber Dover