Hello dear ones! Michael and I had a mother-son date at the Coca Cola Space and Science Center in Columbus, Ga. They were having Free Comic Book Day. Several people dressed up like comic book characters. 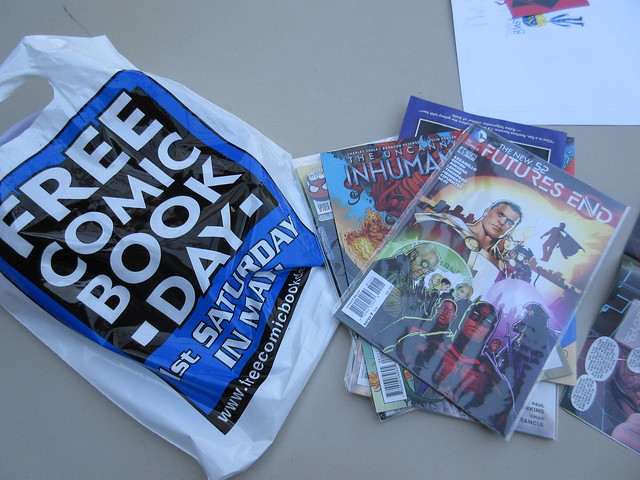 Okay, Elsa is not a comic book character but I got a picture with her anyways. 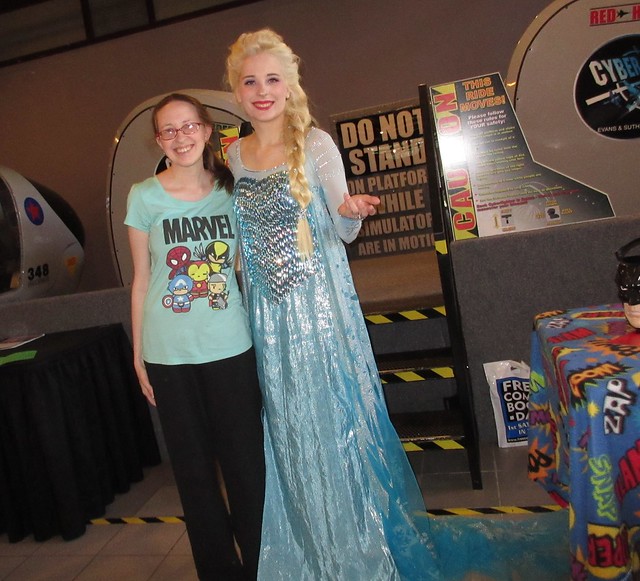 Michael and I with Batman. 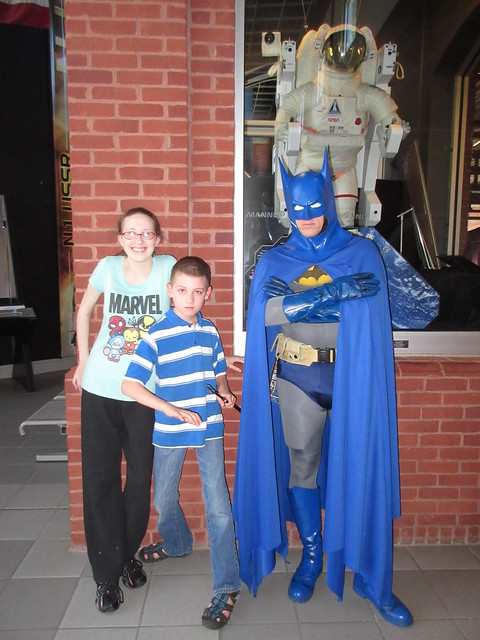 Some of the Avenger’s 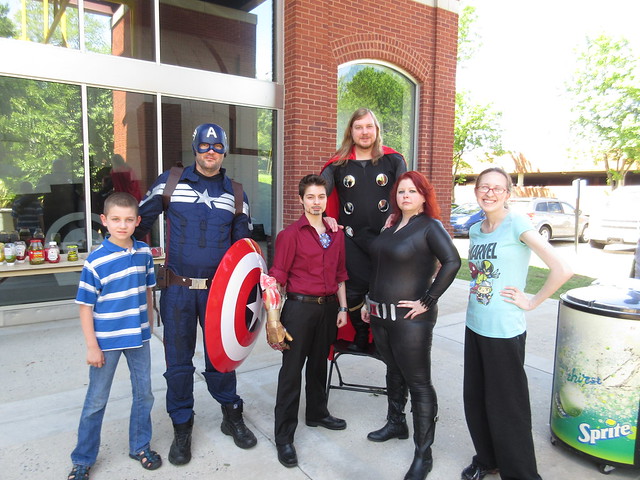 A comic book writer (not sure which one) taught us how to make a mini comic book using one sheet of paper. 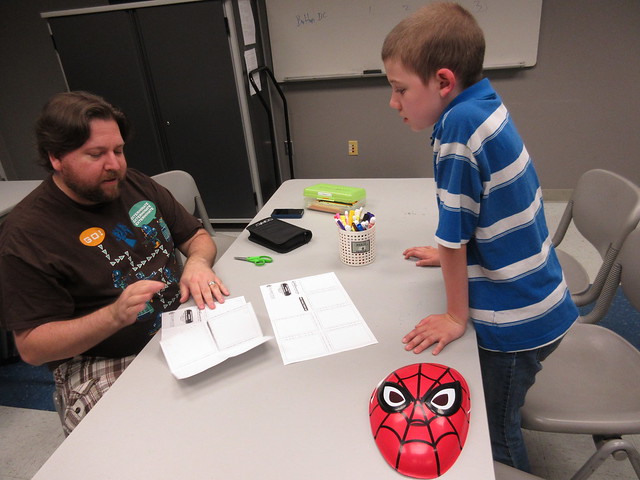 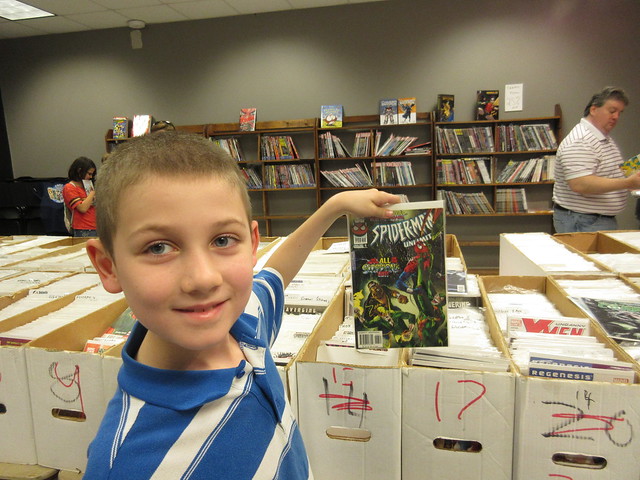 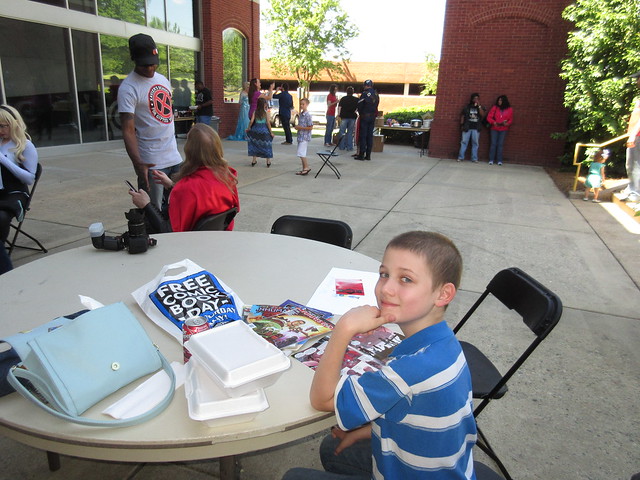 Lastly, Chris turned 31 in May. We didn’t do much since it was around Mother’s Day & his graduation. 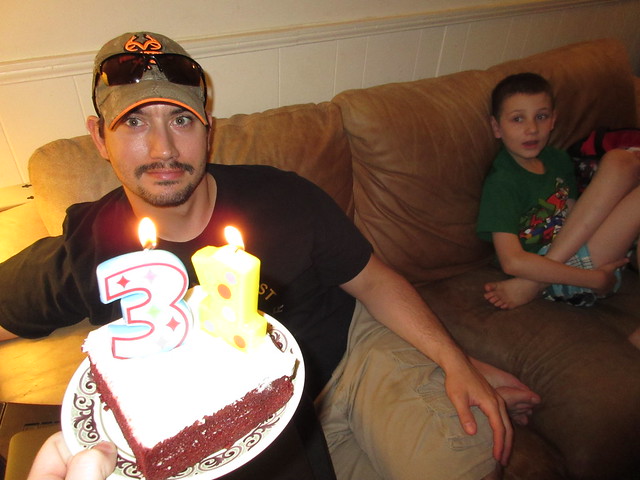 Hello dear ones! My son Michael was born on the same day as his best gal pal Olivia. So each year they alternate birthday weekends. The weekend before, Michael had a small Lego party with his buddies. The weekend after, Olivia had a Frozen birthday party.  More after the pic…

In the past, I’ve done separate posts but since Michael had a small party this year, I decided to combine. I’ll put links at the end for past birthdays: Pirates & Mermaids, Star Wars & a tea party. Michael had his party at Burger King this year. I baked a green Lego cake. I couldn’t find anything for the Lego movie so I had to improvise on party favors. I put binoculars and a bug catching kit together. Then I tied it with ribbon and taped a Lego on it. Michael hung out with his two best buddies, Hannah’s kids Olivia and Liam. It was raining but the kids acted royally with their BK crowns and they played with Legos at the table. Chris’ parents and my Mom and Step Dad joined the celebration. Chris’ parents stayed with my Mom and Michael slept over. So he got to enjoy both of his grandparents. We all went to church together and then we had his party. After everyone left, Chris, Michael, and I went to see the Lego Movie again. We will be singing “Everything is Awesome” for the rest of our lives! We ended the evening with Chris helping Michael build his new Legos.

Hannah usually guest posts but I think the pics are self explainatory for this one. The Frozen party was beautiful. Olivia was darling in her Elsa tutu skirt. The kids had fun building marshmallow snowmen and hitting a castle pinata. Hannah also had a hard time finding Frozen supplies. I think they were sold out. Our problem was nothing was made for the Lego movie yet. I guess because it’s not Disney. Anywho, there was one more boy at the party this year, so Michael and the guys did their own thing. I think the girls spied on them. There may have been a war at some point but I only heard it :D. My Buddy Erin and I broke out a dance number to a Frozen tune but only the kids saw. I think all of us are ready to “let go” of the song “Let It Go”, another catchy tune. I included a pic of Chris helping James, Hannah’s hubby, blow up balloons. He’s holding Miriam, Hannah’s brand new baby girl.

I leave you with pics with grandparents, also Michael riding without training wheels. Links are at the end.