Hello dear ones! Our French bulldog, Annabelle Antoinette, turned two this July. She’s also started going to doggy daycare every now and then. I can’t give her the full attention she needs, since the baby was born. Plus she loves socializing with other doggies. Here are some pictures from Annabelle’s experiences. Enjoy! 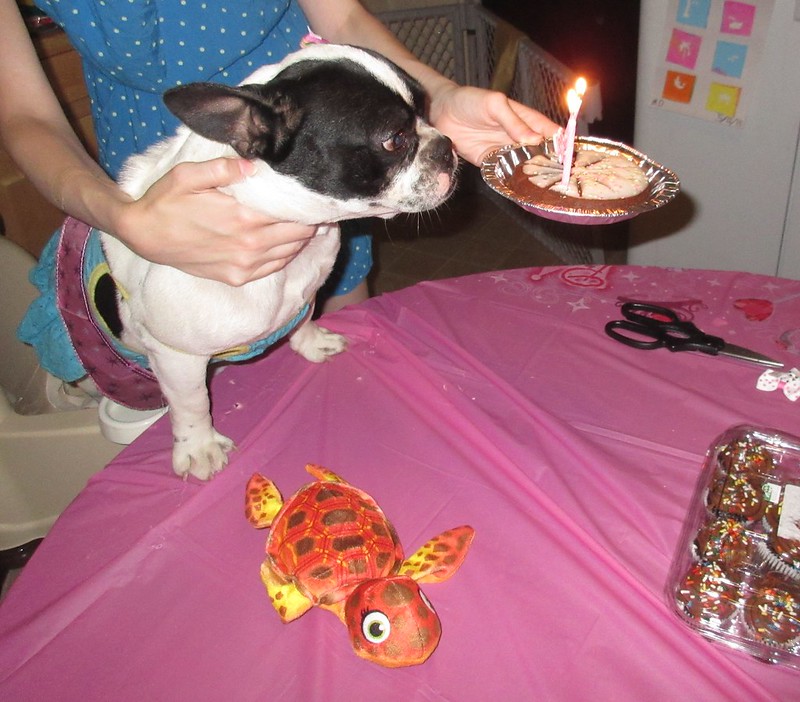 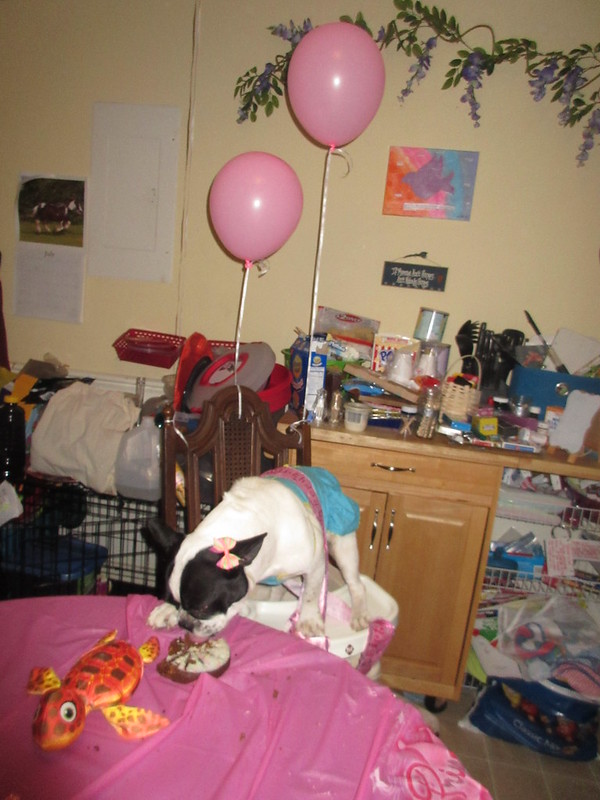 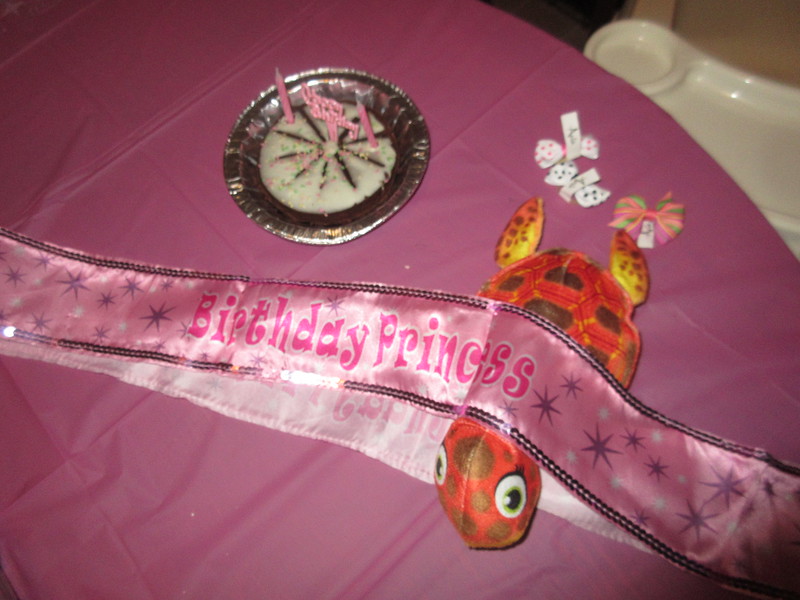 I got the pink decorations at the Dollar Tree. I bought cupcakes for us humans. 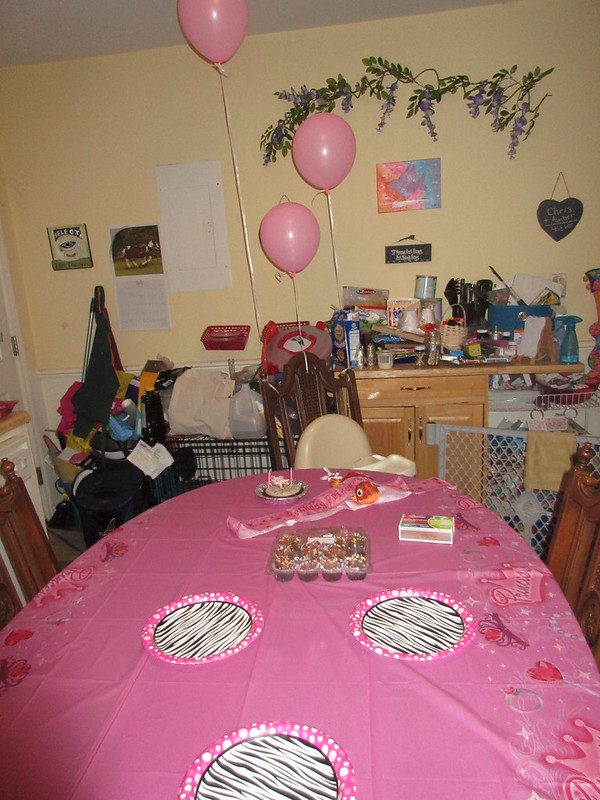 We played “doggy” music found at this link:

Then we told dog jokes: 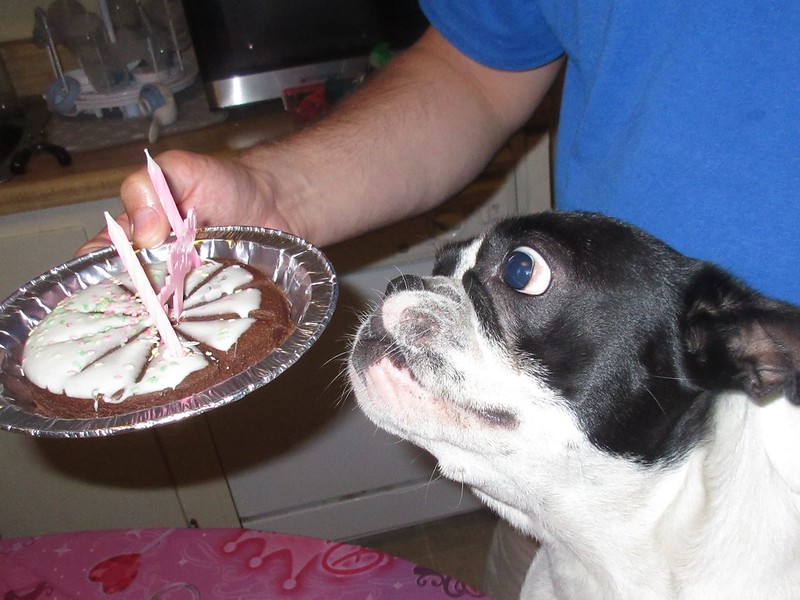 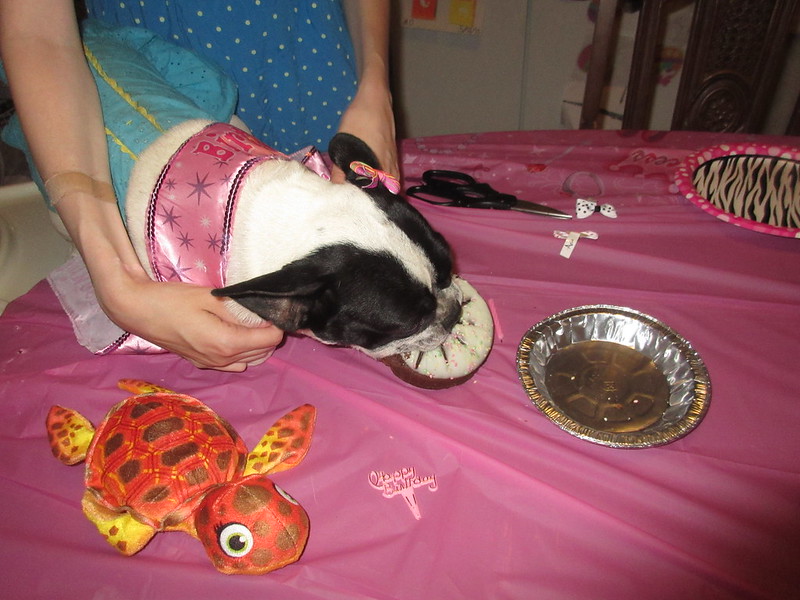 The cat was not invited, but Tessa, our other dog, did get some cake.

Annabelle’s dress which she wore to daycare that day. 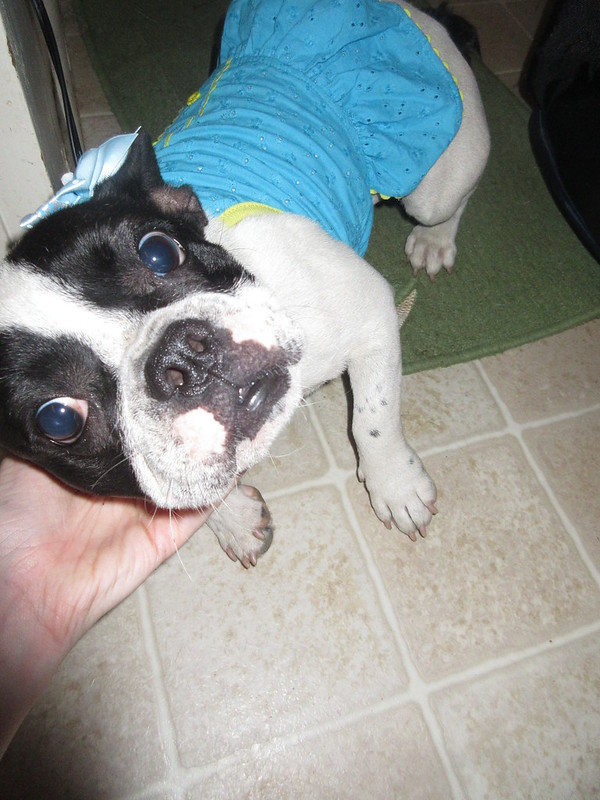 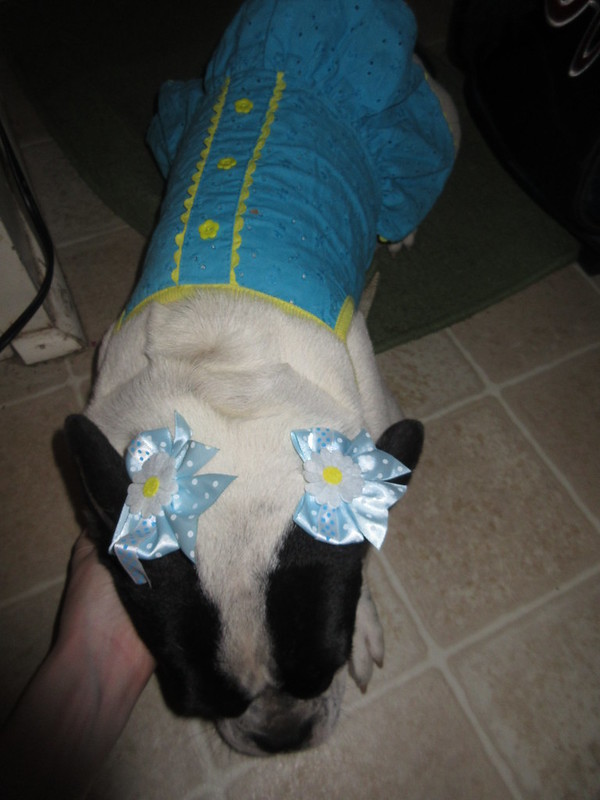 Annabelle hanging with her buddies at daycare. 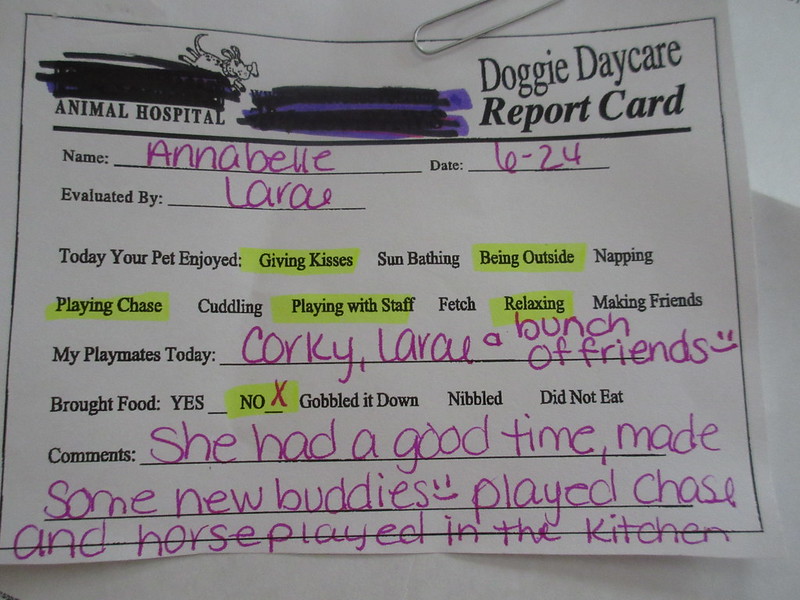 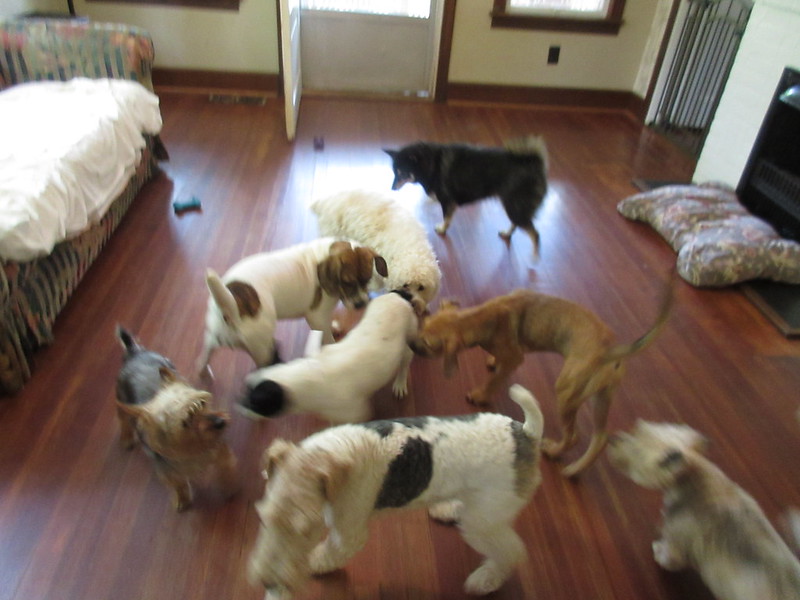 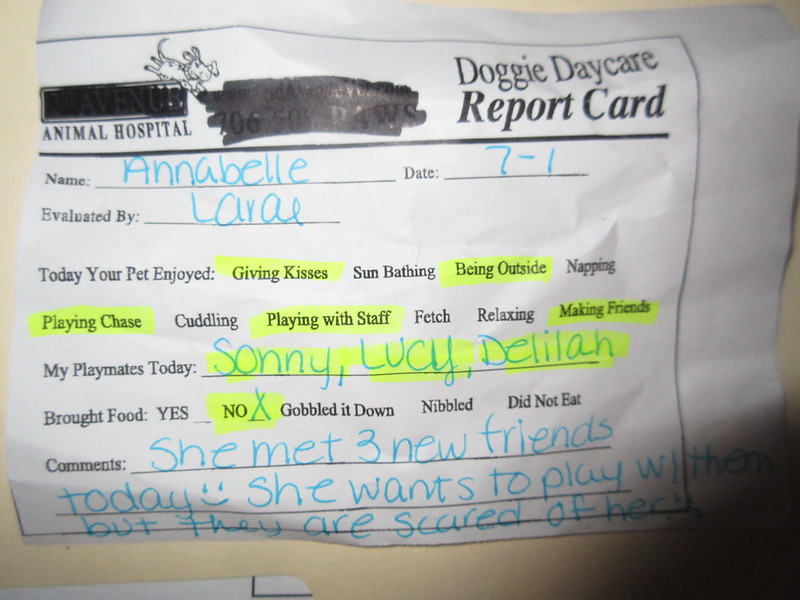 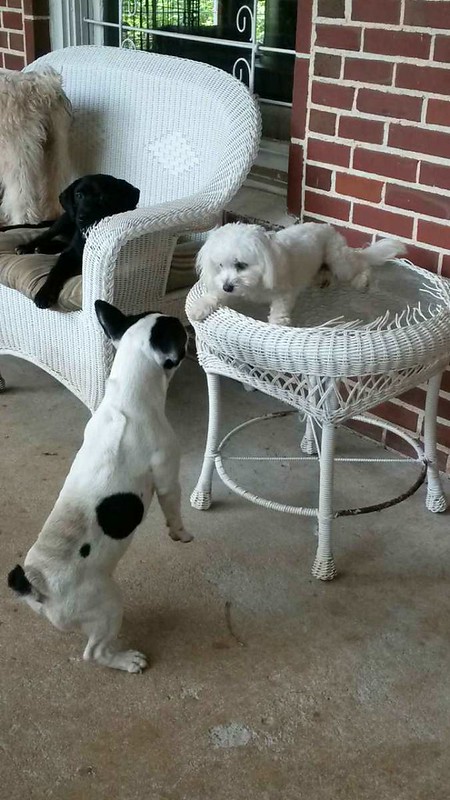 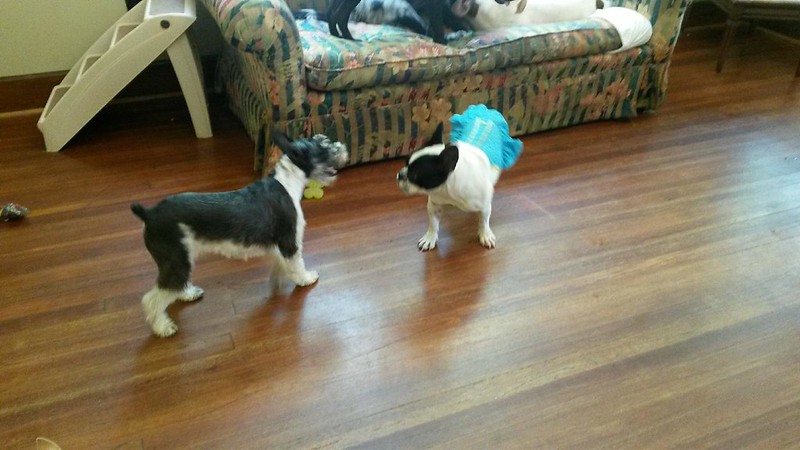 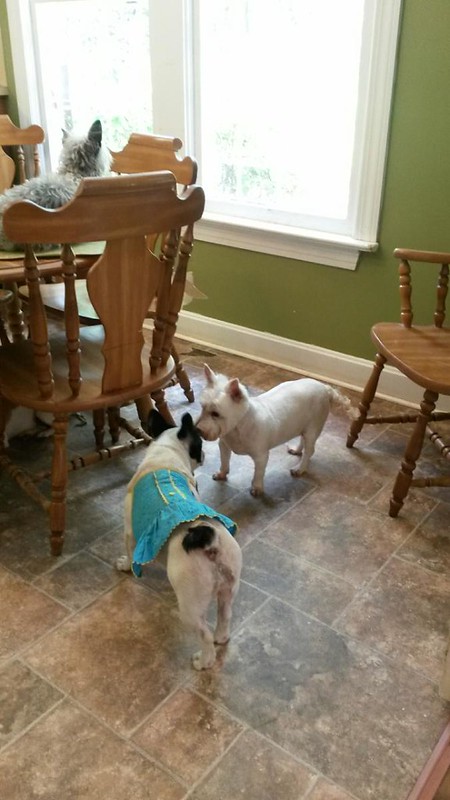 For more posts about Annabelle, go to the category called Annabelle on the right side of my
blog.

We have an addition to our family, a baby girl….french bulldog, Annabelle Antoinette. Miraculously we were able to get the puppy I fell in love with at Petland during our random act of kindness. I visited three times and the third time she was marked down a lot. I didn’t think we’d get her until January, if she was still around then. Well, I visited today…err yesterday now, and she was looking lonely. Her brother had been adopted out. Coincidentally his new owner named him King Louis. They just look royal. I was in shock with how much they reduced the price on her. Praise the Lord! She is a sport and will be properly spoiled. I already got her first outfit. I finally have a little girl I can dress :).  Here’s her pic:

We’ve had a blast with her little quirks. She runs sideways and she likes to bark at her reflection. She snores too which is normal for her breed. We’ll also have to watch her temperature since frenchies can overheat or get too cold. Annabelle’s not quite a purse dog because she’s a chubby 16 lbs.  But maybe I have someone to watch Korean dramas with me 😉 lol.

So now our ark has 7 animals which is the number of completion :). This was not something we planned or expected but the whole family fell in love. What can I say? So far we have these reactions: Tessa (older dog) is annoyed, Chester (kitty) is mad and sticks to spying on the pup, and the other pets (chickens, guinea pig, and fish) haven’t had much interaction with Annabelle. It’ll be interesting to see what she thinks of them. Frenchies are great guard dogs and they also like to catch mice. Hopefully she won’t think the g.pig is a big mouse! Michael has been super hyper and excited about his new “sister”. I had to remind him to let her rest.

Chris and I are taking turns potty training her (err…well you know what I mean). She’s on a schedule like a baby. She came with a training dvd and a pedigree (we’ve never had that before).  It feels like we’ve adopted a child! So I’ve got a lot coming up with throwing my best bud’s baby shower and figuring out the rest of the school year. Somehow I’m gonna fit training a puppy into it. Life is full of surprises!

I wonder what the neighbors will think. They already figured out we have chickens and surprisingly said that they like to watch them. Now what will they think when they see me in the front yard talking baby talk and trying to coerce the pooch to take a “poopy”. Yeah,  I’ve turned into my grandma (she has several dogs and they are her children…not animals). Tessa has never been a prissy dog. Chris made sure that I didn’t make her girly. Tessa likes to ride in the Jeep with Chris and play in the yard.  Plus she is getting to her last years. I don’t like teacup dogs though…ones that I might step on. Annabelle is just the right size. I pray we’ll have a long happy life together :).