Remember: You can click on the links to visit these virtual places! 🙂

Hello friends and welcome to Virtual Friday! Today I take you to the virtual world of Second Life. I’ve been searching for fun family friendly things to do this fall in SL. Autumn is tricky because most of the virtual world is focused on Halloween. Back in rl (real life) we don’t  celebrate Halloween. I enjoy fall festivals and dressing up but I don’t like spooky things and I don’t celebrate death.

I also believe that ghosts a.k.a familiar spirits are demons. Demons like to mimic humans. It’s a great deception Satan uses to make people think their loved ones wander the earth. Thankfully there are only two choices when someone dies…Heaven or Hell. I know which one I choose. So don’t expect me to haunt your neck of the woods. Sorry but I won’t be here ;).

Anywho, I have not been on SecondLife in weeks. I was very surprised to go out my door and find my neighbors houses all spooked. My blue house is on the right (completely unscary) and you can see the pumpkins and ghosts on my neighbors’ houses.
What?! 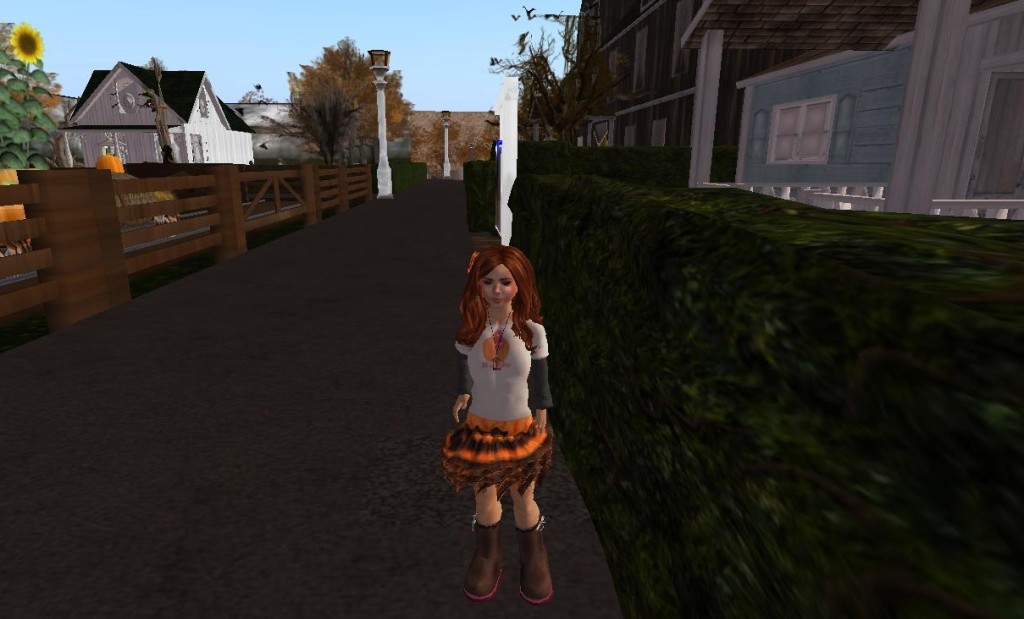 With a little bit of investigating, I figured it out. My neighborhood is having a Halloween contest.

Well, what am I to do? Decorate of course……..for Fall. I know I won’t win the contest but still it’s nice to have pumpkins everywhere. I went on a fall leaf hunt through SL and won a few freebies.  Still, most of my decor I had to buy. Voila! 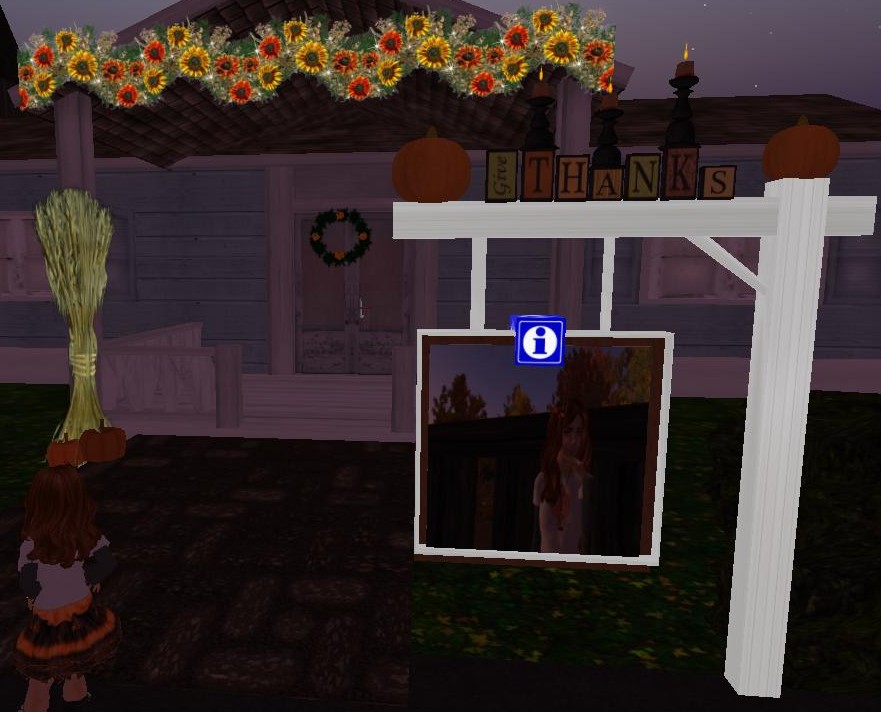 This great kiddie sim has a fall festival. Get over there before it ends and scrounge up some great deals! I found my lovely fall decor at these vendors. Remember you can click on the pics to make them bigger.

For all of you adult avatars, check out the french shopping district, Rue D’Antibes. Most of the shops look classy and pretty modest. The streets have a nice atmosphere.

Rawnie Lane has this lovely Fall art gallery. You can purchase her pics to decorate your own virtual home. 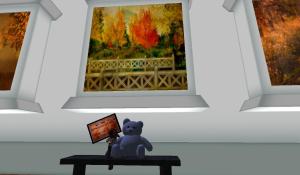 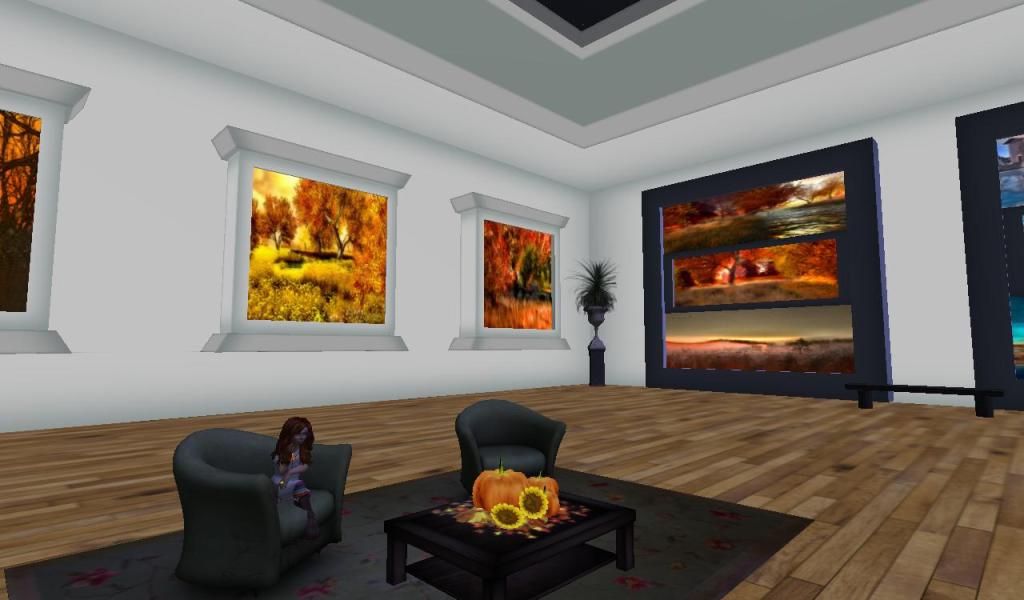 Lastly, I took some great pictures at Wondering Dew. Warning: this place is a bit creepy but thankfully it’s not terrifying. 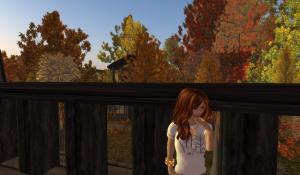 I stuck around to listen to the radio theater. It’s supposed to be scary but it’s not. Old horror movies and radio shows don’t bother me because they are way too dramatic to bring fear. It’s all the gory horror movies these days that bother me and ones that are based on real things like demonic possession. That’s the kind of stuff I don’t want in my over-imaginative head!

When I acted with Family Theatre, I did a few “scary” plays but really they had more comedy than anything.

Arsenic & Old Lace- I played the fiance of a man whose elderly aunts were poisoning old bachelors to “help” them out of their miserable lonely lives. Then they buried the men in the basement and had funeral services. The creepy thing was that they thought they were good Christian women. It became funny when the nephew, Mortimer, found out and tried to thwart their plans. Throw in a brother who thinks he’s Teddy Roosevelt and another brother that’s an ex-con and it gets really crazy! The worst part for me was nearly being strangled.

Ten Little Indians a.k.a And Then There Were None– This play based on Agatha Christie’s book is not nearly as creepy as her book. It actually has a happy ending so to speak. I played the “sexy” secretary, Vera Claythorne, which in Family Theatre mean’t I had to wear very uncomfortable high heels. I actually tripped and skipped backwards over a couch in these high heels while stealing a “gun” from my character’s love interest.

I’m in the middle, the one with the painful heels of death. 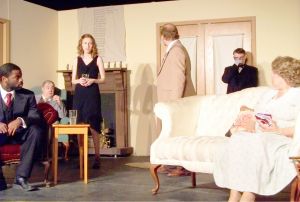 Ten Little Indians is about a group of not so innocents that are invited to a mysterious island. Trapped on the island they are picked off one by one. Since they are the only ones on the island the murderer has to be one of them. It sounds like Clue doesn’t it? What makes it super creepy is that the murders are based upon the poem “Ten Little Indians” and every time someone dies an Indian figurine goes missing. I did a lot of screaming in this play. I also got slapped….not fun.

Oh, and I almost got hanged by the “real” murderer. 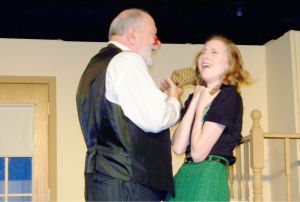 We did this play the weekend of Halloween a couple of years ago. It truly was a strange play. We had several actors drop out…some by illness and some for other reasons. Our director was mugged the day of dress rehearsal. She was actually playing a part in the play because an actress was too ill to play it. Then she was mugged and hurt in the mugging. Thankfully she’s fine. Another actor’s wife had to step into the part last minute.

It was crazy. Some of us were thinking the play really was cursed with all the accidents etc. It was an emotional play for me because I had to shoot a fake gun. The noise from the gun was really loud and traumatizing. So they had to use different bullets to muffle the sound.

I had to induce a panic attack to get into character for my scene with the murderer. Thankfully I knew the “murderer” very well and he’s really a sweet old man in real life. Also, try eating tuna fish on stage and trying to say your lines…not pretty.

He really is a sweet guy I promise 🙂

Anywho, I took this little tangent to say……..well nothing really. It was just nice to reminisce. Have a safe holiday however you spend it. Please be careful and put your animals indoors on Halloween (especially if you have a black cat..like us) because people do horrible things at this time. If you trick or treat I hope you know your neighbors well. There are usually great church Fall festivals as a safe alternative too. God bless & remember the High King lives! ~Amber Dover